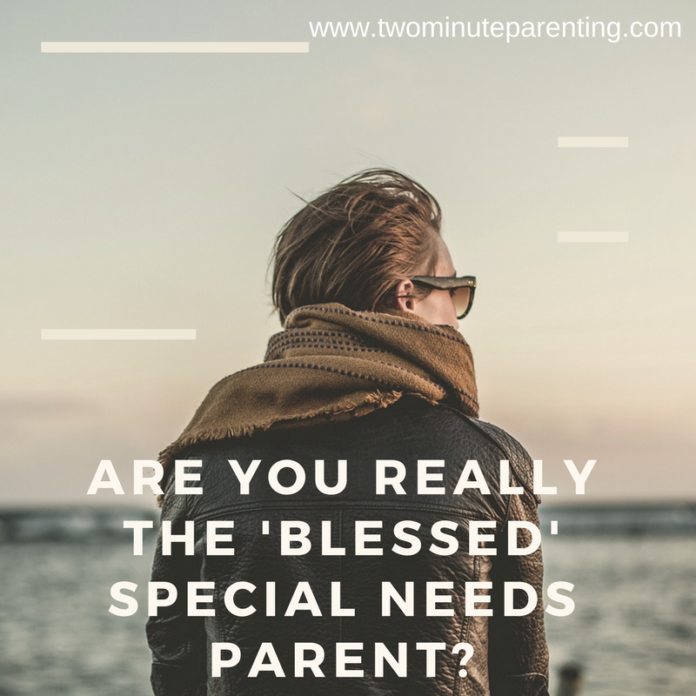 Being  a special needs mother isn’t the best thing in the world as propagated by many but it’s not the worst either. It’s somewhere in the middle! Like that tiny sole boat which keeps bobbing because of constant ocean currents or high tides. The bad days seem like you’d be eaten alive by giant waves, but good days can feel like a calm vacation, although they don’t last as long. The challenges are mostly because of the unfamiliarity of the sea and once that is learned, things become better but never predictable. Because the ocean, as we all know, has a mind of its own and has the capacity to jolt the best of the boats however well made. In some senses, being a special needs parent seems like being the captain of this little boat!

My last few years have been spent in ‘learning’ in this community of special needs. Learning to accept that I am stronger than I thought I was or that I am far more emotional than my past self.

Being a special needs parent brings other challenges too. The one being, ‘challenge of labels.’ No, not for the children but for the parents. Labelling parents to be ‘super-humans’ or ‘blessed’ or ‘special’, however counter-productive it may be.

I wonder why can’t we ‘accept’ that it is difficult! Why can’t we prepare mothers realistically instead of giving false positives about the situation. Why can’t we accept that the fear of a girl, whose father had just died and at 28-year-old she now has to take care of an ailing mother and a 32-year-old brother with severe intellectual challenges all her life, are real! There is never one side of the story and right now nobody is talking about parents as humans! By telling them that real emotions, the fears, the struggles, the nightmares are NOT NORMAL, we are dehumanising them. It is important to motivate but it’s equally important to validate their fears.

What we are doing is exactly opposite! We are labelling the special needs parents as ‘chosen ones’. It is almost similar to labelling women in India as ‘Goddesses’ who are worship worthy but not worthy of equal rights. If we are doing it subconsciously we need to stop and start treating the event of birth of a child with special needs as ‘normal’ so to have the society treat us as ‘people’ and not ‘special,’ a title I am often given by my well-intentioned friends. 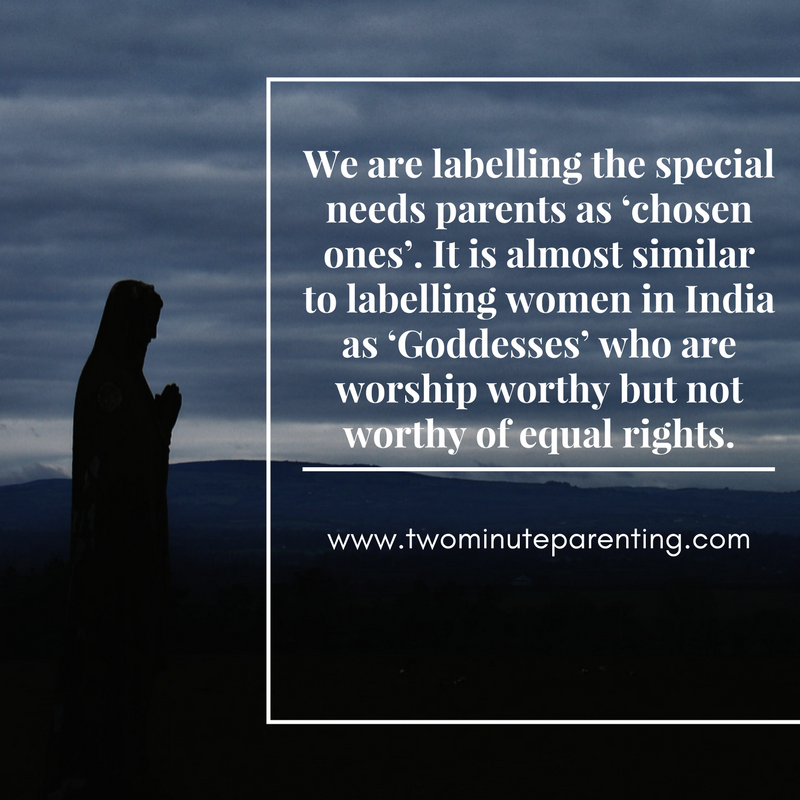 Few years ago, when I was someone who was overwhelmed, ignorant and ready to be swayed by words and emotions that were spoken or displayed in context of disability, I remember being mesmerised by people who told that they were better people after the birth of their special needs children and how I too was the chosen one. And I believed!

I believed how this was the ultimate plan of the universe. By giving me this girl that I was crying for having special needs, the universe, in reality is conspiring me to become the best version of myself, just like it had done to many before me. There were tons of testimonials I was reading everyday in blogs, online forums and groups. I was ready! Ready to be transformed! For a little while, I thought I did become a better person but at every road block I kept coming back to who I inherently was. A practical, emotional, over analytical, cynical, self-centred woman who had certain idiosyncrasies and I couldn’t change that.

You may also like: Assumptions: The Reason We Fail Our Special Needs Children

I was confused. I was being told that I was more patient, accepting, calm and sensitive and so was every one else who had been ‘blessed’ with a child of special needs. But I saw the irony instead.

I was scared to confess or reveal the real me who was struggling or was a real mess. Who was scared of future or even the present. I remember older parents disregarding or even questioning the intent of new parents who talked about their fear of taking their child in public for the first time. The completely natural fears were often compartmentalised into ‘lack of acceptance’. ‘How can you feel that way?’ ‘Be positive’ ‘You are the chosen one’ being the narrative of most such conversations.

I too pretended to be more calm and in control than I was. The fact remained, I was more cranky and used to cry more than ever before. There were days and then there were ‘days’

The trouble is, in spite of all the advertisements I couldn’t find any parent who had reached the ‘Nirvana’ just by the occurrence of the birth of their child. When people accept and expect that regular people become better people just by an event it defies the logics of human limitations (the best phrase I heard from a very knowledgable man). 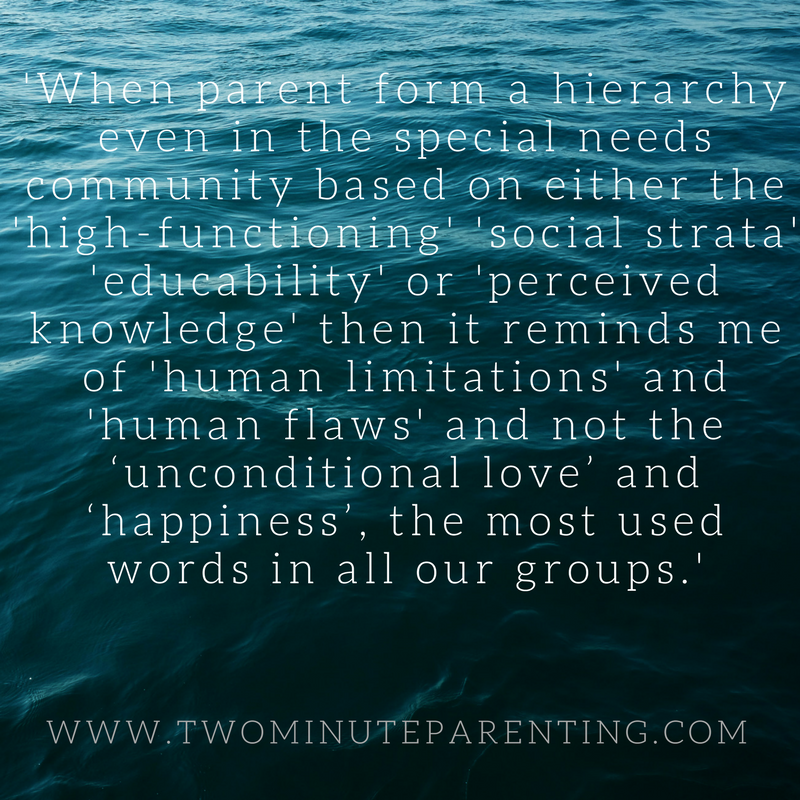 Yes, very profound experiences have the capacity to transform us but just the happening doesn’t! The manifestation, the will, the humility and the perspectives and our acting on that event change us. But that surely doesn’t happen across the board as suggested.

When I hear people saying they’ve become more accepting, I can’t help but notice their ego clashes with other parents on social forums on really trivial issues; when they say they are more accepting, I read their boastful messages about their ‘Google knowledge,’ their ‘I knew I was the chosen one’, narratives to put down others natural fears.

Or when they publicly write ‘how they are kinder’, I see their sharing of articles like ‘7 reasons why special needs parents are better than others’ and I go back to my cynical self.

When parent form a hierarchy even in the special needs community based on either the ‘high-functioning,’ ‘social strata,’ ‘educability’ or ‘perceived knowledge’ then it reminds me of ‘human limitations’ and ‘human flaws’ and not the ‘unconditional love’ and ‘happiness’, the most used words in all our groups.

You may also like: Some Gems For Special Needs Parents From Andrew Solomon

The fact that our inherent traits and personality do take over from time to time is a truth and there is no reason why that can’t be accepted. Each one of us was raised in a unique way and in different set of circumstances. We all are different people with different permutations and combinations of human emotions.

We are human and humans can’t be without flaws. Limitations and challenges within us make the whole equation more dynamic. Our children with special needs have equipped us with knowledge and love and we do extend that love to others but we are not the only ones as commonly believed. I’ve seen many people who in spite of not being a special needs parent are the most beautiful souls and I’ve also seen opposite to that being true as well.

The whole point of this rambling is to really understand and question this notion of ‘our children making us special’ or ‘we are better than the rest’. Yes, we all have changed but if we believe we are on some kind of pedestal, it defeats the theory of us being better people. Isn’t it?