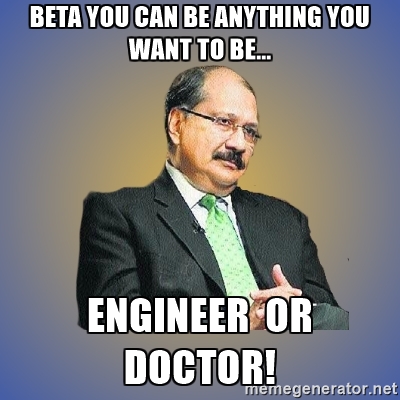 Welcome! If you are the kind of parent who has understood the sarcasm in the title and is here out of intrigue; you are welcome. And if you are the parent who have really come seeking the answer; You’ve come at just the right place. This post is for you. Please stay and let’s try to figure out this together.

These new age ‘passion-driven career choices’ are corrupting our children. We, as parents need to step up and tell our children that careers are not passion-driven but mission-driven – the mission to become an engineer (and nothing short of an IIT would whet our rapacious appetite) or a doctor because nobility lies only in surrounding oneself with blood and mucus. And about painting a landscape or singing a soulful song that would take away ones sorrows or for that matter making someone laugh with antics, are things that the children need to steer clear of.

My child can hate me all that he wants but ultimately he’ll realise the sacrifice I am making for him. He/She is a born genius and shouldn’t waste his/her talent on pursuing ‘humanities’ or ‘commerce’. He is a child of science; a direct result of ‘chemistry’ and ‘biology’ between his parents and he should pursue only that!

Also I don’t know why can’t schools just close these ‘artistic’ streams for the sanity and future of the children. 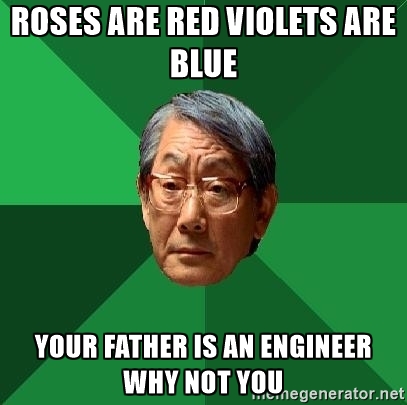 As parents we only know what is in the best interest of the child and there should be no one telling us or them otherwise. We know what career has better and more lucrative job prospects and hence our opinions should not only be trusted but also be followed diligently. I mean they have a right to be ‘happy’ but how difficult is it to understand that ‘real happiness’ lies in slogging to become a gynecologist and then marrying a pediatrician and live happily ever after!  We know what works and what doesn’t. They may have born in another age and time but a parent is a ‘know it all’ entity and should be respected and followed at all times.

Also read: 5 Ways To Get Your Child To Open Up And Talk

We Have Seen More World Than Them

From the time IITs have been established, they are ‘revered’. We know the admiration it commands and how any parent would give their right arm to put their child into one of these. It is THE IIT education that gives us the ‘good parent’ tag, the family its reputation, best marriage prospects, a good salary and possibly a career where there would be no dearth of money and ample opportunities for growth! And for all this if you have to kill your aptitudes, throttle your dreams and throw them away to another planet 23 89 light years away, then so be it! Our children need to realise that IIT has the power to change our blood from red to blue! And we as elite middle class people would very much like blue. 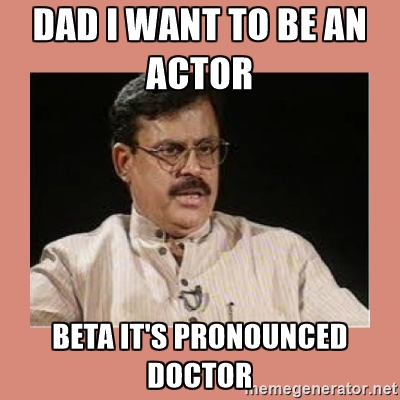 Sticking To Our Guns

This new generation believes that now that they live in an era of economic liberalisation unlike the ‘license raj’ 90s that many of us grew up in, there are other equally good job prospects and unconventional career choices. They tend to talk about people working in MNCs, entrepreneurs, start-ups, radio jockeys, photographers, travel advisors, and lo and behold stand-up comedians and what not. They like to quote about people who are also making similar or more money than engineers but as sensible parents, we should not budge. This generation can’t possibly fathom the RESPECT an IITan’s or a doctor’s parents get. The youngsters today are spoilt by ‘Three idiots’ and the likes.

Aamir khan portrayed one character and everybody is ready to give up their stable career choices a spin and is eager to join some dreamy passion filled make-belief-non-engineering world. The reality can’t be further away from it. If my son’s passion is playing guitar, I can’t let him just be a guitarist! He can study engineering and when all his responsibilities are over then he can play the guitar! If he likes to be an artist (whatever that even means), I would be stupid not to point out to him how being a doctor or an engineer or an IAS officer is better that anything of his chosen field. This obsession towards artistic orientations must go. 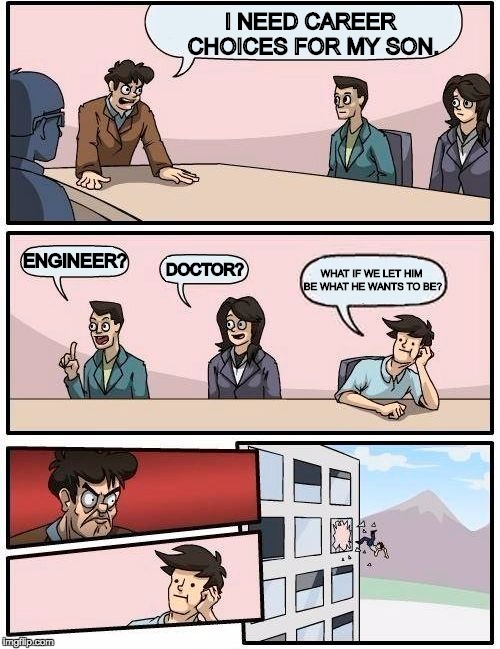 So What if there are a few who’ve made it big as artists or photographers or actors; We are aware of the success ratio and this fame is supposed to happen to only other people. We have to teach them all the lessons we’ve learnt so they never fail. The truth is we are only doing it for them.

He/She Is Just A Kid

Half of our lives we keep wondering if this is what we were meant to do. So even if at this age, we are not sure what do we really want from life, how can these 16 year olds decide about their career. They don’t have that kind of knowledge or common sense! They may have better marks or are better exposed to the technology or have read more about the prevalent markets and contemporary job opportunities but that doesn’t make them worldly wise. 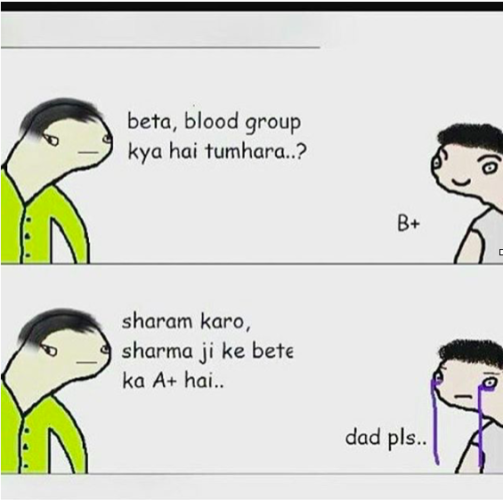 We Only Want Them To Be Happy

What is happiness if not a stable job or a financially secure future. You ask anyone around in your neighbourhood and see if that’s not true! All people who are successful are eventually happy! What wrong are we doing if we want our kids to be happy? They may say that it’s an elusive goal to achieve or that it’s not a place but a state to be! But we need to be cautious about these new age explanations and understand that these are made to destroy our generations.

We Live In India Not Finland

India is a country where, due to the sheer population, there is always a fear of being dispensable and common. It is not entirely our fault that India is not a country of dreamers, entrepreneurs or professional risk takers. There is a reason we all averse risk in careers.  We usually get retired from the same job we joined in and there is a certain dignity in that. By pushing our children into IITs and Medical, we are preparing them to compete and be secure in this harsh world! Yes, we know many of our children may not have aptitude for it and get emotionally wrecked and sometimes even commit suicide.  But that’s mostly a collateral damage that we as society will have to pay for not emotionally manipulating and training them enough at a young age.

In the end we all need to understand that parenting is not for faint hearted. If one has to ensure the success and happiness of their next generation, one needs wisdom, courage and better judgement to not get influenced.

Why it is important for every child to be either a Doctor or Engineer We need to instil ‘Fear’ in our children about not being able to make a good living if they don’t give their all to engineering or medical and if that doesn’t work, we can tie their IIT or medical entrance test to family’s pride. That usually work. However, at no cost we should let them chase some fancy dream of doing some ‘lowly’ job at the cost of making them ‘happy!’ They don’t even know what makes them happy! We do!

On that note, we all need to unite against the prevalent culture of ‘pursuing your passion’ breed and nip all such thoughts in the bud.